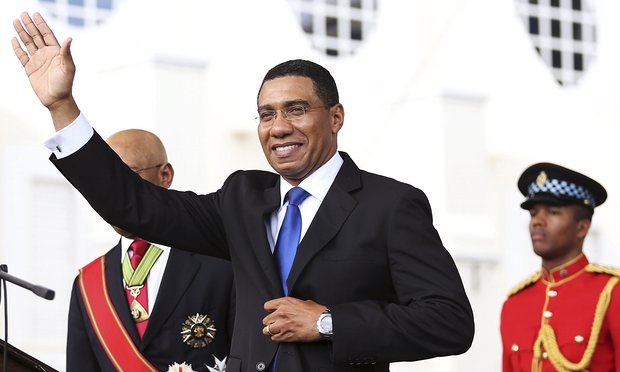 Party leader won tightly fought election in which he campaigned on ending era of austerity, pledging to reduce debt while cutting taxes.

Jamaica’s new prime minister, Andrew Holness, has been sworn in after a narrow general election win and vowed to increase growth and cut taxes in a reversal of the previous government’s austerity program.

Holness has been criticised for promising to trim taxes even as Jamaica struggles with a debt-to-GDP ratio of about 125, but he argued economic growth would plug the gap.

“The priority of this government is to grow the economy and create meaningful jobs,” Holness said in his inauguration speech in Kingston on Thursday. “In so doing we will more rapidly and sustainably reduce debt.

“Our government will ease your tax burden, but you must invest and spend wisely,” he added, encouraging Jamaicans to spend on the local economy to create jobs in manufacturing, housing and agriculture.

Holness’ Jamaican Labour party replaced the People’s National party after winning 32 of 63 parliamentary seats in elections a week earlier, with some constituencies decided by just a handful of votes.

The tight race reflected divisions about the country’s economic direction. Economic growth had improved in recent years under a strict austerity plan with the International Monetary Fund. The former government was credited with helping inflation shrink to a 50-year low.

But unemployment still hovers around 13% on the island of 2.7 million, hitting 38% for young people.

Holness has promised some 250,000 jobs and said he envisioned Jamaica becoming a centre for finance and technology in the Caribbean.

The top three global ratings agencies – Standard & Poor’s, Fitch and Moody’s – have all upgraded Jamaica’s sovereign debt in recent months and predicted the new government would maintain the country’s agreement with the IMF.

This entry was posted in Uncategorized. Bookmark the permalink.